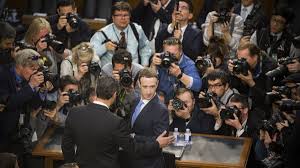 Like the old tale of the blind men describing an elephant, Wednesday’s congressional antitrust hearing with the heads of Google, Apple, Amazon, and Facebook differed dramatically according to your perspective. The Wall Street Journal said the six-hour hearing showed that there was room for compromise between the way Republicans perceive the technology giants and the way that Democrats do. But Slate and a number of other outlets pointed out how most of the Republican members of Congress spent their time talking about alleged bias by Facebook and YouTube aimed at conservatives (something for which there is absolutely no evidence) rather than antitrust. The Verge’s Casey Newton said the „lunatic whipsawing between companies, issues, and conspiracy theories“ made the hearing feel like a social-media feed, and not in a good way: „Every question shouted, every answer interrupted, nothing truly ventured, and very little learned. Polarized and polarizing.“ (Newton also said that, in the end, he came away „mostly heartened“ by the idea that Congress might finally be prepared to do its job as an antitrust regulator.)

Part of the problem—as with the elephant—was that the hearing was just too massive, sprawling, and unfocused. As Binyamin Appelbaum of the New York Times pointed out, each of the tech companies should probably have had its own hearing, since the antitrust issues that apply to each one are very different. (Will Oremus of One Zero said sources told him the technology companies themselves pressed for a hearing with all four, as a way of muddying the waters. If true, then their attempt was successful.) Even at six hours, once you subtract the grandstanding and irrelevant questioning by people like Republican Matt Gaetz—who seemed most interested in whether the companies shared what he called „American values“—or the sad spectacle of Rep. Sensenbrenner asking Zuckerberg why Facebook took down a comment from Donald Trump, Jr. (something Twitter did), there wasn’t much time for more than one or two questions about actual anti-competitive behavior.